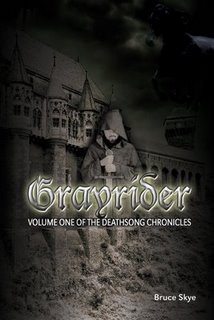 Gabriel, the exiled king of Rivalin, comes before King Airell to warn him the Ansgarian army will invade his kingdom before the night is over. Airell tells him he has no one to send. Gabriel wants revenge for the murder of his family by the Ansgarians. He decides to fight the incursion without help.

As this takes place, Deirdre (Airell’s daughter), flees the kingdom of Cynyr north of Boadhagh. She knows now her mentor, Morrigan, created the Ansgarian army her father has fought for years. She goes south to warn him of her. Because Deirdre does not believe in herself, the young sorceress has difficulty in performing magic.

Once she is reunited with her father, she tells both he and Grayrider about Morrigan. Her power is growing; only Gabriel’s magical sword may yet destroy her. He must go to Cynyr to fight her. He agrees if Deirdre attends him, seeking her counsel. On that journey they fall in love and foil many efforts by Morrigan to kill Gabriel by both armies and sorcerers.

Grayrider fights Morrigan and sees his beloved slain by the sorceress before he is finally able to kill her. He returns to Rivalin brokenhearted. The ending is a complete surprise the reader will not expect at all.

A former technical writer, detail is important to Bruce Skye. His research for the Deathsong Chronicles included medieval armor and fortresses, as well as Celtic names and magic. “If you create a world, it must be consistent. And that’s what I strive for Grayrider’s world to be. I’ve built a database of material for each of the Deathsong Chronicles. Those databases aid me in keeping the world the same from book to book.

“When I wrote Grayrider, I followed the advice of Stephen King. I did not write the book following any sort of outline. I have no more idea than my readers do when I write a novel what will happen in the midst of the story. It makes it more exciting for both the readers and myself.”

← Interview with Fred Squire from Across the Pond by Barry Eva
Interview with Deirdre from Grayrider by Bruce Skye →
%d bloggers like this: